Chief James F. Blair reports that over the last 24-hour period the Morgan City Police Department responded to 39-calls of service. The following person(s) were arrested as the result beginning on 5/28/2020 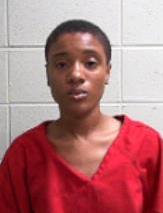 An officer conducted a traffic stop in the area of Front St. for a traffic violation, and the driver was identified as Jalaycia Declouet. During the traffic stop, she was found in possession of suspected marijuana. She was placed under arrest and booked into to Morgan City Police Department.